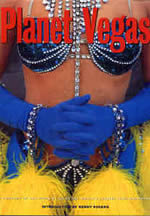 “The King” was the king of Las Vegas throughout the early ’70s. Elvis debuted at the New Frontier in 1956, but didn’t return intil 1969, when he played the International (purchased soon after by Hilton). The trimphant comback led to Elvis’s nearly decade-long stint as the Las Vegas Hilton’s premier headliner, and he performed in 144 sold-out shows. Las Vegas is the mecca of Elvis impersonators. Jesse Garon was featured in a double page spread on pages 66-67 of the Planet Vegas book.